Welcome to the Now

What do you experience here and now? If there’s one thing you know beyond all doubt, it’s that right here, right now, you’re aware. A universe of colour, form, sound,  touch, fragrance, and taste is flowing through your consciousness, leaving no traces. Right here, right now, your formless awareness is filled with forms. Colours and shapes and sensations are dancing through this awake space that is aware of them here and now. The screen on which you read these words is glowing. A steady heartbeat thumps in your chest. Without you having to think about it, your chest rises and falls with the incoming and outgoing of your breath. In. Out. In. Out.

As you bring your attention into your inner body, you can feel a tingling sensations in your hands and feet, the aliveness within. You can feel the fabric of your clothes rubbing against your skin when you shift your arms and legs or straighten your back. Maybe these words appear in your mind as you read them, or a thought about the past or future drifts through your awareness. Maybe you’re aware of some emotions stirring within. Maybe these emotions are clear and you can recognize them as happiness or sadness or anger or love. Or maybe they are fuzzy, diaphanous, or indistinct and words seem less able to encompass them.

Perhaps you notice that as your attention zooms into the now, your mind begins to calm, to grow quieter. Maybe this unspeakable feeling–wonder? joy? awe?–begins to flood through your chest like the spreading warmth of a campfire. Maybe you begin to notice, as you rest here in the now, that these forms and shapes and colours and sensations that flow through you aren’t separate from the clear spaciousness of consciousness that is awake to them. Can you find any dividing lines between this screen or this page and the awareness that is awake to it, in which it appears? Our thoughts can carve this moment up into infinite divisions. And yet, without mistaking conceptual distinctions (divisions in thought) for ontological divisions (divisions in Being), we cease to perceive separation in diversity. Without giving rise to a thought to divide this awareness and universe into ‘two,’ this formlessness and form, this emptiness and fullness remain One.

Waking up to the Oneness or nonduality of our true nature is central to all of the great contemplative traditions from Zen to Advaita Vedanta, Sufism to Kabbalah. Here’s the thing that tends to happen in many of these traditions, however. Relatively speaking, when people first wake up to the Oneness that unites the forms that fill the universe with the formless awareness in which they are seen, they tend to get fixated on the emptiness aspect. They exclusively focus on the formless awareness that is awake to this moment and filled with the universe. And they deny and dissociate the world of form altogether.

The newborn realization of Oneness can feel fragile and in need of protection. There is sometimes a fear that this new insight that has been ‘gained’ will be ‘lost.’ In addition, the stream of circular thinking about a separate self–which some call ‘the ego’ or ‘the selfing activity’–often hijacks the experience of Oneness and uses it to expand its sense of a separate identity. Ironically, it incorporates the idea of being Oneness devoid of separation into its sense of separate identity.

The thought “I am a spiritual person” or “I am enlightened” sometimes arises and gets held as true. This identification is sometimes attended by a smug sense of superiority, being special, having attained a lofty state, or being superior to others who have not realized this. This sense of superiority and separation is, of course, very ironic, given that the experience that engendered it was of the illusory nature of separation!

Moreover, what people tend to do at this point is to devote much of their time to arguing with and trying to refute all expressions of apparent duality (e.g. opposites, qualities, and diversity of form of all kinds) because they seem ‘false’ to them and in conflict with their sense of Oneness. They become so fixated on ‘abiding as awareness’ that they totally cut themselves off from the wondrous diversity of form that appears within that awareness.

In Zen, though, this state of fixating on the emptiness of awareness and ignoring the diversity of the world of form is called being ‘attached to emptiness’ and is seen as a grave trap (see for example Korean Zen Master Seung Sahn Soen-Sa’s Dropping Ashes on the Buddha). Many spiritual folks stop here thinking they’ve found the ultimate truth, the final word on the Self.  This is unfortunate, because while there is a great sense of freedom here, there is not yet a reembracing of the abundance of form. A depth of love remains for us to fall into, and an intimacy with the many shades of the human experience that runs deeper than we may have ever felt before.

Re-Embracing Diversity as the Expression of Oneness

The next morning I awoke as if I had just been born into this world. Everything seemed fresh and pristine and intensely alive. A vibrant stillness filled my entire being.

~ Eckhart Tolle in the Power of Now

If, as my Zen teacher Myokyo used to remind me, we choose not to become fixated on awareness and continue our meditative practice, something wonderful can happen. A deeper realization can dawn. We can come to realize that diversity of form is not a threat to our awareness of Oneness, but is in fact an expression of Oneness itself.

We realize that all of the apparent multiplicities and polarities–or to use a frowned-upon word in the spiritual scene, dualities–in the world of form inter-are, interdependently co-arise, and are encompassed by the Oneness that I am, woven into its very fabric, then we can celebrate them, rejoice them, and yes, even love them. We don’t have to try to fight them, deny them, repress them, project them, dissociate them, or make war on them as we are prone to do while attached to emptiness.

We realize, in short, that apparent duality in form is ultimately an expression of nonduality. Form and formless, Fullness and Emptiness, are One, and we are this One that is beyond all concepts and distinctions altogether. Before, we were so fixated on the formless that we totally denied and dissociated form. Now, we re-embrace form as the flowering of Oneness and One with the formless awareness in which it appears.

We rediscover the beauty that is the expression of the formless in form, of the unmanifest in manifestation, of boundless Being in apparently bounded beings. And we find, in this re-embracing of form, that a fountain of creativity tends to spring up from somewhere deep within us as we find our Self playing in the world of form without the delusion that we are a separate self alienated and cut off from Being. The Formless is ultimate Freedom for it is ultimately free. The world of form is the resplendence of Fullness. We are vast enough to embrace both Freedom and Fullness, which seem like ‘two,’ but are really One.

Fixating on Awareness vs. Re-Embracing Form

Speaking from the relative perspective, these differing levels of realization–attachment to emptiness and re-embracing of form as the expression of Oneness–tend to play out differently in the body-minds of those who express them. Those who are ‘attached to emptiness’ tend to speak in a kind of monotone. They seem to lack a sense of expressive vitality, of love for what is, of passion for the present moment, and yes, even of sexual excitement, which can only return when form is re-embraced.

If, in a moment of wonder and appreciation, you exclaim to them “wow, this is a beautiful song!” they respond that “there’s no song and no one here to hear it” in a smug tone. And if you tell them “I really love you just as you are,” they answer that “there is no one here to love!”

Those who are fixated on the formless tend to be totally uninterested in creative pursuits. The idea of painting a painting, or writing a song seems meaningless, because “there’s no one here to paint and nothing to paint, no one here to sing and nothing to be sung.” In contrast, those who have re-embraced the Beauty of form that dances as diversity within the Freedom of the formless tend to be prolifically creative and fresh in expression.

Why is this? It’s because when we see that apparent ‘duality’ isn’t a threat, but an expression of nonduality itself–yes, the dance of our flowering Self in action, movement, and form–then we can love the splendor of manifestation and embrace it. This is an embracing that notably features neither the feeling that our sense of self is ‘at stake’ in form, nor that form is marked by separateness. In more technical terms, we become aware that phenomenological distinctness does not imply ontological separateness; things appear distinct even while being One. The experience of this re-embracing of form after the wintry flatness of attachment to emptiness feels liberating, freeing, exciting, and inspiring. It feels like coming alive again after a passion-crushing sleep.

Shaken free from the death-grip of seeing diversity of appearance as implying separateness of being, there’s an even deeper sense of freedom than we felt before. We find that we can honour the beauty and wonder of form without seeing it as separate or weaving it into the ‘selfing activity’ of a story about being a ‘separate me.’ We can embrace the unity of emptiness and form. We can love our parents, friends, and lovers while knowing that they are not separate from us. We can appreciate awareness without fixating on it. There’s a sense of relaxing, of releasing, of letting go, of flowing freely. 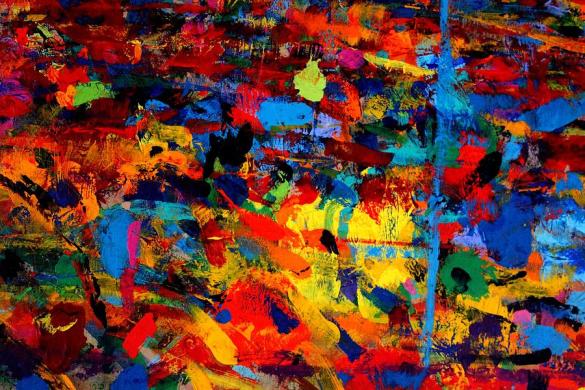 In short, when the fixation on awareness falls away and the world of form is re-embraced as an expression of Oneness, there tends to be an accompanying sense of feeling free and at ease with form, with the body, with being creatively wild, with bringing worlds into being and dancing imagination into art.

There’s a sense of delight in exploring the world of form with renewed vitality and excitement. Everything feels fresh. Every tree is seen with new eyes. Every bite of flavour feels mind-blowing. Every touch and taste and sensation and kiss flowers as a burst of form in the vastness of the formless.

We can love the treeness of trees and the humanness of humans and the mountainness of mountains while seeing that all form is the formless itself, that the dying is the Eternal, that the precious moments spent with loved ones unfold within the Timeless, and that the finite forms that arise, endure, and subside are expressions of the Infinite.